To think that only a week ago I was unenthused and unmotivated about writing anything on here. I had no idea what to say, no new topics I had a burning desire to discuss and was seriously trying to come up with something new so that you all didn’t run away and leave me for being boring.

Well, and then along came Hunter.

We were scheduled for a cesarian all along, so Thursday night I didn’t expect much sleep – and certainly didn’t get it. We were due to be at the hospital by 8am, so Evie stayed at mums the night before. It’s an indescribable feeling knowing that your baby will be born the next day, and knowing exactly how it will happen too. We chose a cesarian for many reasons, but after Evies emergency evacuation, and the blur that followed, I mainly wanted to be in the moment and coherent for this birth.

Nothing ever goes to plan of course and the first major hurdle we encountered on Friday after being admitted was finding that my platelets had fallen again since the last blood test. I have gestational thrombocytopenia, which basically is a low platelet count in my blood which means a higher chance of bleeding. Being gestational, this only happens to me when I’m pregnant and I just have blood tests regularly to monitor them. They’re supposed to sit between 150-600 and mine are always below 150. The morning of, the had tested at 103 3 days prior, and I was told that we would need to have them done again pre surgery and that had they fallen since, there was a chance that I would have a general anaesthetic. Not only would I be completely asleep for the birth of my baby, but Chris would also not be allowed in the room, and Hunter would be brought out to him in a waiting area. I would not even be woken up until I was completely stitched up, so I would be groggy, out of it and the complete opposite from what I (or anybody I’m sure) wanted.

Luckily for me, they had fallen to 97, and even though I was originally told under 100 would mean a general, they told me they were happy to go ahead with just a spinal tap – it was an incredibly long 2 hours of waiting to find this out.

Skip to being wheeled into theatre, meeting everybody who would be a part of my ‘birth team’, and seeing my favourite doctor from my visits to hospital for monitoring pop up from behind the curtain as the woman who would deliver my child and I was all good to go! I zoned through the spinal going in (not too bad), felt my feet start to go tingly and suddenly we were underway. Almost immediately I felt a huge throbbing in my throat and my heart started to feel like it was trying to escape my chest. I could hear my heart beat going crazy on the monitor, even though I thought I felt relatively ok and calm. I was given a few different drugs through my IV to calm me down while asking Chris what was wrong, and the surgery continued.

It felt like it went for ages, my stomach being tugged and pulled (you can feel no pain but you can feel every other sensation) and then they asked if we wanted to see babes be born – we didn’t necessarily, but we did want to see him be lifted up before being taken away. Chris had the camera ready because against everyone else ‘thoughts’ on the matter, I really wanted to film this and suddenly we had a boy! I am thinking about uploading the video (to website only, as to not scar people on social media who don’t want to see), but its pretty powerful and amazing! It’s not all gore, don’t worry.

One of the most amazing things I witnessed after this was when I was wheeled into recovery and Hunter was placed on my chest. I had watched some youtube clips on the ‘breast crawl’ before he was born, and as the midwife turned away to do something with a promise to help come back and latch him, he simply moved his way down my chest, to my breast and popped himself on. It was AH-MAZING. The midwife was in awe, I was in awe, Chris was – well, i’m not sure whether he really cared so much, but it was great.

Post surgery, I was in pain – much more pain than Evie, and pain that lasted probably 36 hours on and off. I was given so much endone and tramadol to try and fix the problem to the point where I maxed my dosage and the pain team was called. Anyone who knows me know I would rather fix my headache with tiger balm and a heatpack than medication, so this was pretty hideous. I only got relief when I was given huge dosages, and it only lasted as long as the drugs limit to wear off again. Eventually the day after having Hunter, I asked for my catheter to be removed (it hadn’t been at this stage because on my pain and inability to move by myself), and I got out of bed and moved to the other side of the room to a chair. Over the next few hours, the combination of actually getting up again, and some pain medication, my pain settled and I could ‘pass wind’. My bowel was visibly swollen, and clearly post surgery it was just in an awkward position and so full of air (and yeah, probably shit), that nothing was helping. Movement was HARD but fixed the problem and I finally felt good again. This was a really shitty time for me, because I had deliberately chosen to have a cesarian to try and avoid all of the crappy stuff about childbirth that I experienced with Evie, and I wanted to be more alive and ‘with it’ for my babies. I was also stapled together this time, as well as invisibly stitched on the inside layers, so I was a lot more sore – the staples are being removed today (day 5) which I am totally scared about, but the sooner the better for my healing!

Anyway – heres some pictures from the big day, and of my completely adorable, size 5 zero’d baby. 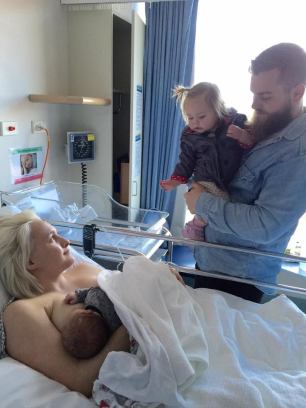 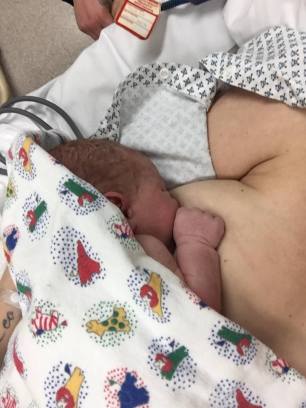 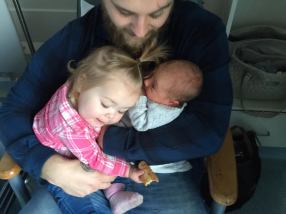 3 thoughts on “And along came Hunter”