The first two instalments in birth stories by local mums.

I hope you love them as much as I do.

My experience getting pregnant wasn’t the fairytale easiness I thought it would be. With my first ever pregnancy, I still remember the excitement and fear I had for that first scan with my husband and Mum being in the room,only to be told the baby didn’t have a heartbeat and had passed away. In that instant the raw emotion I felt was indescribable, I couldn’t understand why or what I had done for it to happen. I was told it would pass on its own, but a week later, another scan and my HCG levels still rising I was told I was having a missed miscarriage and went to the hospital to have a d&c.

Having a D&c for a missed miscarriage was so emotional for me. After the operation I woke up feeling such a loss and that a part of me was gone. We then tried again and got pregnant with our baby boy. To me it felt like a miracle. He was sick and spent a week in the NICU but he was amazing, perfect and ours. Trying for Baby number 2 we thought would be easy. Even though I still had some anxiety, ‘What’s the odds of it happening twice?’ I would say to myself. How wrong I was though.

Another 2 missed misscarriages which needed d&cs and another normal miscarriage happened. Getting pregnant is meant to be the most exciting time but for me it was filled with so much dread and fear.

I would cry almost everyday.

With a missed misscarriage there is no signs you have lost it until that scan. My hcg still went up and I still had all the symptoms. I did have an overwhelming feeling at all my scans though that something wasn’t right. The first time I thought it was just nerves, but the others I just knew. It was such a gut feeling I had even told my husband to not come to the scan as I already knew it wasn’t going to be a good outcome. Finally losing hope after I had been told by one doctor there was nothing wrong with me I went to another doctor who diagnosed me with a genetic blood clotting disorder. This was causing my blood to be thicker then normal and as a result it wasn’t going through the placenta properly causing the babies to die.

I was told they had no idea how Archie had survived without taking any medication in his pregnancy and that he truly was a miracle baby. When I got pregnant again for the 6th time I was instantly given needles and medication to take. I had to inject myself daily with clexane and had another injection I had to do 2 times a week. I also had hormones I needed to take. The first scan I had at 6 weeks I saw what I had been searching for for almost three years. That small little thing had a heartbeat it was my baby and it was alive. Our second little miracle was born last year and I am so truely blessed. I know there are so many mums out there going through so much worse then this. But for anybody who is struggling and thinking ‘Will I get my rainbow baby?’, there is hope -there is light at the end. It’s hard to truly explain the pain and scar a miscarriage causes. I never met these babies but I feel such a loss for them. I wonder often who they would have been, and still have days where I cry about them. I never thought it could hurt to lose something you never actually had. 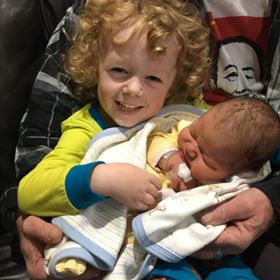 My first son Mitchell Wayne was born on Monday 19th May 2014 after 6.5 hours of labour at 38 weeks and 2 days. I truly believed that it was just Braxton Hicks because I had had them for 2 weeks. We went into the hospital at 1am and I straight away said no drugs. I did try a little bit of gas but it made me green and sick. All of a sudden I felt like the pain was too much and asked for drugs but my midwife reminded me I wanted to try water birth – I said yes and she ran the bath.

When I hopped into that bath at 4:30am, it was the best relaxing feeling ever. At 5am we welcomed our beautiful boy into the world. I was so sceptical of water births until we did the baby class and for other women who wish to do it, DO IT!! I had the support of my husband Daniel and my mother Christine (this was her first grandchild)

My second son Aiden Michael was born Sunday 12th june 2016 after so much chaos.

At 32 weeks Aiden decided it was time to come into the world. I went into spontaneous labour and I was very lucky I went into the hospital early enough that the midwives were able to stop it before we had a premature bubba. Again at 35 weeks he put me into labour for 17 hours with dilation to then just stop and not come, (little s****) then at 36 weeks and 4 days he actually made his entrance. At 12noon I straight away knew I was in labour, and after 2 false alarms just my mum and I went into the hospital while my husband got Mitchell and my dad all organised.

At 1pm we headed into the hospital, at around 1:30ish the midwife did her checks on me where we were told I was already 7cm! But because daddy wasnt there yet my contractions went from an 8 to a 3. My husband finally (I had steam out my ears) got to the hospital at 6pm. At 7ish the doctor came in and broke my waters (weirdest feeling ever!) and my labour then hit fast and hard. All of a sudden I needed to push and I wasn’t comfortable so I turned myself around and bang he was out and at 8:09pm he was in my arms. It was so different because all I could think was ‘he feels so gross!’ because Mitchell came out clean from the water birth (unfortunately I was unable to have a water birth with Aiden because he was under the 37 week term date (by 2 days) so he had to be classed as premature).

And then bang I was a mumma of two boys.

I loved both my pregancies and both my births. I was so lucky that I had easy going uncomplicated births. I know not all women are that lucky.